To anyone checking up to see if I've added anything new, or to anyone who is finding this for the first time, this is to let you know I've upped stix and moved to a new blog address.  This blog was about my time in Japan.  That being over for the present, I've started a new blog called: Georgia's Geornal and it can be found here: georgiasgeornal.blogspot.com

It's been fun writing about Japan, and I may well mention it again, but as a new chapter has opened for me here in the USA I really felt the need for a change.

Please feel free to visit me at my new blog site!
Posted by Georgia at 12:24 PM No comments:

You'd think I would have taken a few more pictures of people I was visiting, but somehow the fabulous scenery and these guys took precedence! To browse the whole (large) group of pictures click on the middle of the slide show running to the right and you will be taken to the Picasa Album where you will be able to view the larger versions and even leave comments or questions.
Posted by Georgia at 9:04 AM 1 comment:

whatever that means.  If you've ever spent considerable time in a place far away from what you called home, you might know the feeling.  Things look familiar, sometimes a bit different, but recognizable in most cases. It takes a while to get over wanting to be able to access things like 100 yen shops, fruit and vegetable shops, a train like the ones you've gotten used to.

Maybe one of the worst things is paying for things in dollars.  In Japan it's not uncommon to carry large amounts of yen with you, but, despite it's strength against the dollar, it some how feels different to be letting all those dollars slip through your fingers.

I've pretty much gotten back into the routine of sleeping when it's night time, but am still quite tired and feel pretty low in the afternoons and seem prone to headaches.  There are lots of things to do and people seem to be oblivious to the fact that making decisions is hard work for some of us. I'm trying to do things one sensible step at a time.  Still people ask if I'm looking for a job, and if I'm getting ready to head back to Japan soon. To be honest, the only appealing activity to me most days is curling up with a book.

On a different subject; this blog says in it's subtitle that it's documenting my fourth trip to Japan.  When I set it up I thought it might run a year or two, not nearly four.  Thanks to those of you who have stuck it out with me. My question now is if it should stop or change, and what it should change into if I choose the latter?  Any suggestions?
Posted by Georgia at 5:44 AM 1 comment:

Last day in Japan till?

Today was filled with all manner of last minute things.  I needed to cancel my City registration and my Japan Health Care so headed out to the City Office with Sachiko san at 10:30.  We headed off for lunch after reasonable amounts of time waiting in a queue and filling out paper work to cancel both documents.  I did a last load of laundry and continued packing and organizing.  At this point it's much easier to decide not to bother taking things that were on the maybe list.  Space runs low.  I also chose my seat and printed my boarding pass.

Later I went to the SoftBank store to try to cancel my phone.  I wasn't able to do it though, they said that the contract holder has to come in to the store to cancel. So, Ruth, next time you come to Japan you can take care of that little detail.  Since I purchased the phone all those years ago I plan to just kidnap Pookette and take her back to Florida with me.

Had a cup of coffee with a colleague at Mr Donut and then came back to finish packing.  The Makinos stopped by to say goodbye with Emiko. Yasuko called for advice on the title of the Tokyo Dome Quilt for January.  She has to send it in for photos sometime in October. 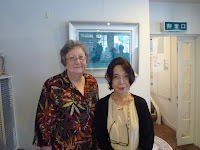 The day started with the early service at the church.  My friend, Sachiko came, but had to leave to go to a meeting after. Here's a picture of us. 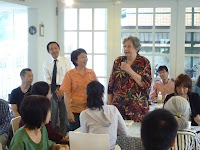 During the lunch time after the second service there was a farewell for me.  I've totally lost track of how many this makes.  A lot by any standard. Many people said nice things about me and all of the years I've been hanging around Ichikawa.  My friend Inoo san came for that part. 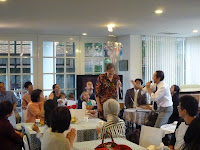 There was the traditional silver ball hanging from the ceiling which had a pull string on it.  When pulled, the ball opens and dumps flower petals and streamers and a thoughtful sentiment written on the central streamer.  A convenient package of tissues was attached in case one became overcome by the experience. 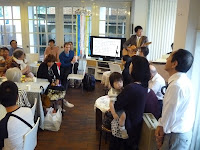 There were singing and prayers and gifts all by way of saying "Thank You" and then many many individuals who wanted to say good bye, take care, come back to Japan. 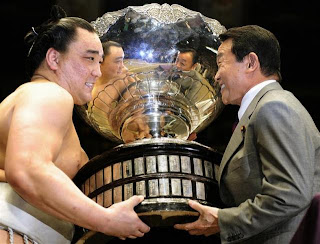 I had a little break then and came back to my room and started rearranging my packing. Later in the afternoon I went downstairs to watch the final day of the Sumo Tournament.  The championship to be determined by the final bout between the undefeated (in the previous 30 bouts) challenger and the previous champion who had lost one match of the previous 14 days. Hakuho vs. Haramafuji. Two wrestlers from Mongolia.

And the winner of the Emperor's Cup in the Aki Basho is Haramafuji.  Will Yokozuna ranking be far behind?

The couple who had offered to take me out to dinner came and watched the last three bouts along with the pastor.

Then indeed there was dinner.  What a lovely event that was!  So much silverware on the table I was almost intimidated.  A couple of hours and three knives, three forks  and countless spoons later, coffee was served with crystal sugar on a stick to stir with.  Each course was a lovely presentation.  Sauces and garnishes added all manner of bright notes to the nicely cooked, colorful food.  Dessert was a sampler of fruits and custard and caramel and ice and mint.  Uber-yum.

And now that this report is complete, back to rearranging the packing.

It's 11:30 pm so I don't have time to look for some cute illustration for the number 3 or the concept of threeness.

Another mixed bag of work and visiting places for the last time and having a great time with friends eating Japanese food.  I was really happy to figure out that the Guest Home management software is not broken even though it didn't seem to be allowing me to manually change amounts or put in mileage etc.  I was sure we had finally broken some fundamental function of the program.  What a relief to realize that because I use the nine key numbers on the right hand side of the keyboard the NUMLOCK button must be on for it to actually work!

Had a lovely dinner at the local Okonomiyaki place and the waitress took pity on we poor foreigners and made some of those lovely pancakes for us to keep us from struggling and making a mess and perhaps even embarrassing ourselves in front of others. (not likely)

Haramafuji won his sumo bout again today, 29 in a row, or maybe 30, but Hakuho won his too, so they will still fight for the championship tomorrow, the last day of the fall tournament.  Life just gets more and more interesting!
Posted by Georgia at 11:38 PM No comments: 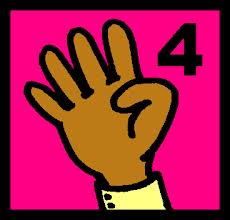 Today at lunch time I was farewelled by OMF colleagues.  With a Regional Council meeting going on this week it meant that more people were around at lunch time and the party numbered something like 18.  It was a great excuse for a trip to Costco for pizza and salads and sushi and cheesecake and tiramasu. Yum.

Thanks to everyone for their mostly kind and sometimes humorous accolades and for the truly lovely authentically Japanese gifts.

This evening I look forward to an Eel Dinner with dear friends who are concerned that I keep up my strength!
Posted by Georgia at 2:50 PM No comments:

Georgia
Having returned from a 4 year stay in Japan I am now facing retirement. Always a new adventure!